Laura Gibbs · 27. Pandu Cannot Resist
One day Pandu was seized with desire for his wife Madri. "You are so beautiful. Come, let me embrace you!"
"No!" shrieked Madri.
When Pandu touched her, he died, just as the curse foretold.
Stricken with grief and guilt, Madri leaped onto Pandu's funeral pyre.
Kunti then raised her sons and the sons of Madri together; they were the Pandavas, sons of Pandu.
Kunti brought the boys to Hastinapura.
King Dhritarashtra acknowledged his nephews, and the sons of Pandu grew up together with Dhritarashtra's sons, who were known as the Kauravas, descendants of Kuru, the ancient founder of their dynasty.
Inspired by: The Mahabharata: A Shortened Modern Prose Version by R. K. Narayan
Notes: This story is from Chapter 1: The Eighth Baby and 2: Enter—the Players. 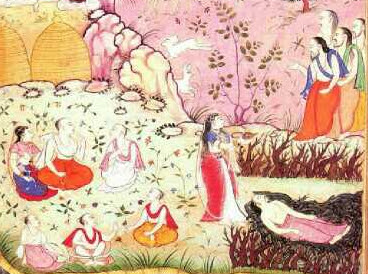