Laura Gibbs · 163. Duryodhana Despairs
"Shalya is dead!" Ashwatthama told Duryodhana. "Yudhishthira killed him. Let me be your commander now. I can still destroy the Pandavas!"
"But there is no army left to command," groaned Duryodhana.
Meanwhile, Sahadeva and Nakula were battling the last of the Gandharan soldiers. Sahadeva had killed Uluka, Shakuni's son, and Shakuni then attacked Sahadeva, shattering Sahadeva's chariot. Sahadeva leaped to the ground, grabbed an axe, and smashed it into Shakuni's skull as he shouted, "Draupadi is avenged at last!"
When Duryodhana learned that his uncle Shakuni was dead, he ran away in despair.
He could see the war was lost.
Inspired by: The Mahabharata: A Shortened Modern Prose Version by R. K. Narayan
Notes: This story is from Chapter 15: Delirium of Destruction. 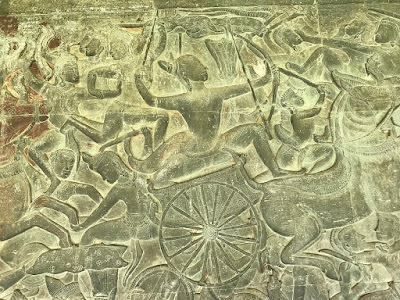