Laura Gibbs · 154. Drona Hears Word of Ashwatthama's Death
Bhima shouted, "Listen to me, Drona: I have killed Ashwatthama!"
Drona could not believe what Bhima was saying. "Yudhishthira!" Drona shouted. "You have never told a lie. Tell me truly: is Ashwatthama really dead?"
"Ashwatthama is dead!" Yudhishthira shouted, loud enough for Drona to hear him. And then he whispered, "Ashwatthama the elephant."
Drona, casting aside his weapons and armor, sank down in a trance of despair.
Drupada's son Dhrishtadyumna then raced towards Drona and cut off his head with his sword, fulfilling the purpose for which he had been born.
Ashwatthama, however, was very much alive and vowed revenge.
Inspired by: The Mahabharata: A Shortened Modern Prose Version by R. K. Narayan
Notes: This story is from Chapter 15: Delirium of Destruction. 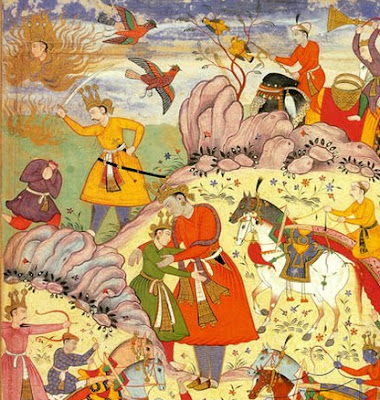