Laura Gibbs · 157. Bhima Finds Dushasana
Bhima found Dushasana at last. "Do you remember my vow, cousin?" Bhima shouted, brandishing his sword.
Dushasana did remember Bhima's vow and fled in terror, but Bhima grabbed him and pulled him to the ground.
"Is this the hand that held Draupadi by the hair? The hand that pulled off her sari?" Bhima shouted, as he tore Dushasana's arm off and threw it across the battlefield, where it struck Duryodhana in the face.
Then Bhima bent down and drank Dushasana's blood, fulfilling his vow.
Next, he summoned Draupadi, who washed her hair in Dushasana's blood, just as she had vowed.
Inspired by: The Mahabharata: A Shortened Modern Prose Version by R. K. Narayan
Notes: This story is from Chapter 15: Delirium of Destruction. 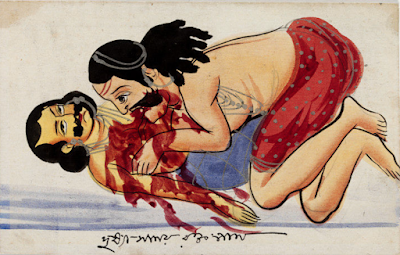