Laura Gibbs · 31. Drona Comes to Hastinapura
The brahmin-warrior Drona came to Hastinapura seeking employment. As he approached the palace, he saw the young princes, both the Pandavas and the Kauravas, trying to retrieve a ball they had lost in a well.
"Help us, sir!" said one of the boys; that boy was Arjuna.
Drona plucked a blade of grass and threw it like a dart. It pierced the ball, and then he threw another blade of grass, and another, forming a chain so he could pull the ball out.
The boys, amazed by his abilities, ran to tell Bhishma, who engaged Drona to be their guru.
Inspired by: Jaya: An Illustrated Retelling of the Mahabharataby Devdutt Pattanaik.
Notes: This story is on p. 59. I have left out the character Kripa who had been taken in by King Shantanu. Kripa's twin sister Kripi was Drona's wife. That relationship by marriage already connected him to the royal household at Hastinapura. 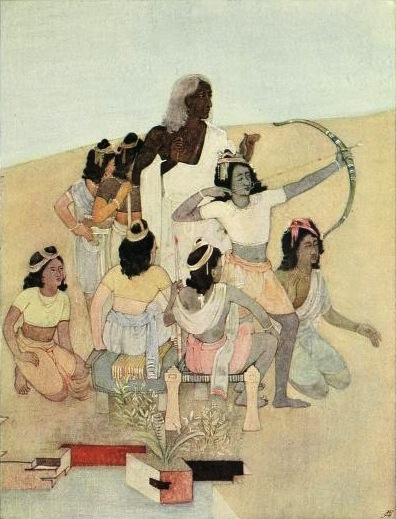