Laura Gibbs · 62. The Story of Nalayani
"Impossible!" Drupada shouted. "A woman cannot have five husbands."
Vyasa then appeared, as if he knew he was needed. "I can explain," he said, smiling at his grandsons. "This is Draupadi's fate. In a past life, she was Nalayani, married to the sage Moudgalya. Because of her devotion, Moudgalya offered to grant her a boon. She asked him to make love to her in five different forms, and he did. Later, when Moudgalya renounced the world, Nalayani despaired. 'I want my husband, husband, husband, husband, husband,' she sighed, thinking of Moudgalya's five forms. The gods are granting her wish now."
Inspired by: The Mahabharata: A Shortened Modern Prose Version by R. K. Narayan
Notes: This story is from Chapter 4: Bride for Five. Moudgalya tests Nalayani by having a repulsive appearance, but she does not flinch. Later, it is the god Shiva who grants her wish for the five husbands. In a version told by Pattanaik in his Jaya (p. 92), Moudgalya is disgusted by his wife's feelings, and so he curses her to become the wife of many men in her next lifetime. 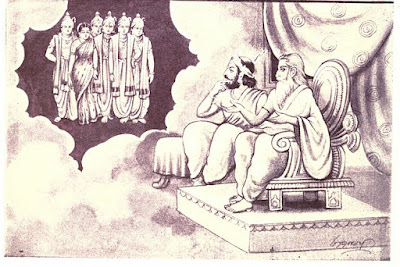