Laura Gibbs · 64. Draupadi Marries the Pandavas
Reassured by Vyasa, Drupada gave his approval. Draupadi married Yudhishthira first. Next she married Bhima, and then Arjuna, who had actually won her at the swayamvara. Finally, she also married Nakula and Sahadeva.
Draupadi agreed that she would spend a year with each of the Pandavas in turn. If any brother violated this arrangement, in thought or in deed, he would go into exile, completing a pilgrimage to redeem himself.
Meanwhile, news of these events reached King Dhritarashtra and his son Duryodhana in Hastinapura. The Pandavas were not dead after all! Even worse: they were now Drupada's allies by marriage.
Inspired by: The Mahabharata: A Shortened Modern Prose Version by R. K. Narayan
Notes: This story is from Chapter 4: Bride for Five. 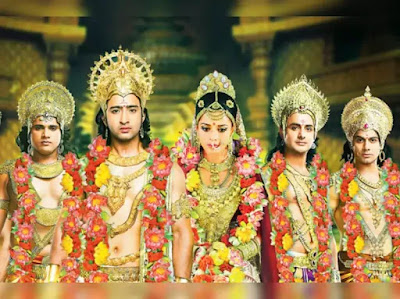