~ 59. Arjuna Competes in the Swayamvara ~

Laura Gibbs · 59. Arjuna Competes in the Swayamvara
When Arjuna approached the target, the kings and princes shouted, "Brahmins aren't allowed!"
But Draupadi was intrigued and did not object, nor did King Drupada.
Arjuna nodded his thanks to Drupada and smiled at Draupadi. He then seized his bow, taking aim as he looked at the target reflected in the oil.
Arjuna shot not just one arrow, but five, hitting the target every time.
Draupadi draped the victor's garland on the mysterious brahmin.
The kings and princes grew even more angry, but Bhima fought them off, and the five Pandavas fled with Draupadi, taking her to their humble home.
Inspired by: The Mahabharata: A Shortened Modern Prose Version by R. K. Narayan
Notes: This story is from Chapter 4: Bride for Five. 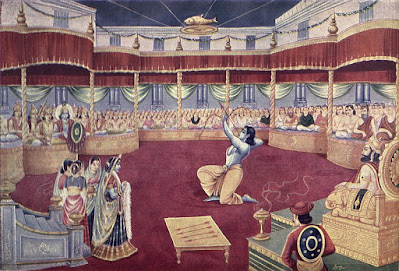