Laura Gibbs · 171. Rama Becomes King
After embracing Lakshmana, Sumitra said, "Go wake Urmila!"
Lakshmana's wife Urmila had been sleeping all those years so Lakshmana could stay awake.
Lakshmana found his wife fast asleep in their bed. "We have returned," he whispered. Urmila opened her eyes and wept with joy when she saw him.
Rama was then crowned king, and Sita was his queen. The royal priests conducted the ceremony, and the devas showered them with flowers from heaven.
The reign of King Rama had begun. Rama's brothers and their wives rejoiced, as did Hanuman, Sugriva, Jambavan, and Vibhishana, along with all the people of Ayodhya.

Inspired by: Sita: An Illustrated Retelling of the Ramayana by Devdutt Pattanaik.
Notes: This story is on p. 261 of the book. Pattanaik references Telugu folk songs where Urmila is at first terrified when Lakshmana wakes her, but then he soothes her by combing her hair. 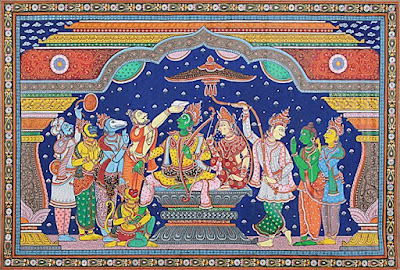