Laura Gibbs · 79. An Ascetic Approaches Sita
After Rama left to follow the golden deer and Lakshmana left to follow Rama, an ascetic approached Sita, begging bowl in hand. "Feed me, please," he said.
"Certainly," said Sita. "Come inside."
"That would not be right," replied the ascetic. "You are alone in the house. Come feed me here, in the open."
Sita gathered some food and then approached the ascetic, hesitating as she crossed Lakshmana's line.
The ascetic vanished and Sita saw Ravana in his place. He grabbed her, and she struggled to free herself from the grip of his twenty arms. "You'll never escape," he snarled. "Never!"
Inspired by: Sita: An Illustrated Retelling of the Ramayana by Devdutt Pattanaik
Notes: This story is on p. 131 of the book. In Valmiki's Ramayana, this is the Aranya Kanda (Book 3), sarga 49. In other versions, Ravana cannot risk touching Sita, so he scoops up the ground she stands on and carries it away, with Sita on it. Pattanaik notes that in Shaktibhadra's Ascharya-chudamani, Rama and Sita have a magic ring and magic hairpin which protect them from demons and reveal any demon in disguise. Ravana comes to Sita in the form of Rama; he does not touch her, but when she touches him, she discovers he is Rama. Shurpanakha does the same, approach Rama as Sita. Pattanaik also includes an anecdote about the play: thinking Shankara's silence was displeasure, Shaktibhadra burned the manuscript, but then Shankara blessed him so that he could recover the whole play from memory. You can read more about this play at Wikipedia. 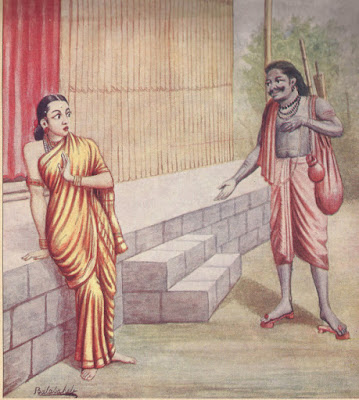