Laura Gibbs · 161. Ravana Invokes Kali
Ravana decided to pray to the warrior-goddess Kali for protection. With Kali's help, he could become completely invincible, safe even from humans and monkeys.
"You must stop him!" Vibhishana said to Hanuman and Angada, so they flew to Lanka and found Ravana deep in meditation. The monkeys pelted Ravana with fruits and flowers he had offered to the goddess, but they could not break Ravana's meditation.
Then they began stripping off Mandodari's clothes. "Help me, husband!" she screamed.
This broke Ravana's meditation. He came to Mandodari's aid, and the monkeys flew away, mission accomplished: Ravana received no boon from Kali.
Inspired by: Sita: An Illustrated Retelling of the Ramayana by Devdutt Pattanaik.
Notes: This story is on p. 240 of the book. Pattanaik notes that in other versions of this story, Ravana invokes Shiva. Angada's attack on Mandoari appears in the Adhatma Ramayana and in other regional versions. 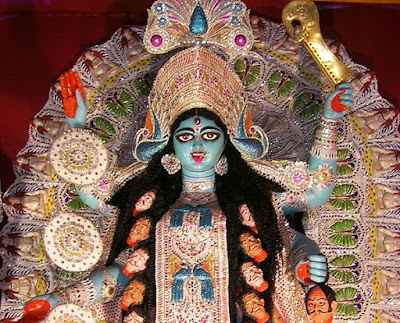