Laura Gibbs · 151. Ravana Awakens Kumbhakarna
Ravana's spies confirmed the rumor: Rama was alive! Enraged, Ravana launched an assault, but the monkeys and bears repelled the rakshasas, felling them with trees, crushing them with rocks, and slashing them with teeth and claws.
Ravana then woke his brother, the giant Kumbhakarna, who had gone back to sleep. "Save me!" Ravana said.
So Kumbhakarna marched into battle, grabbing monkeys and bears by the handful and devouring them.
But Vibhishana reassured Rama. "Ravana has awakened our brother too early!" he explained. "Kumbhakarna will die this day; he cannot escape his fate. Launch a counterattack, and you will be victorious."
Inspired by: Valmiki's Ramayana.
Notes: This is the Yuddha Kanda (Book 6), sarga 60. Cursed by the goddess of sleep, Kumbhakarna could be awake only one day in the year. He had already been awake recently, when he had advised Ravana to return Sita to Rama. By awakening Kumbhakarna from his sleep before a year had passed, he was condemning his brother to death. 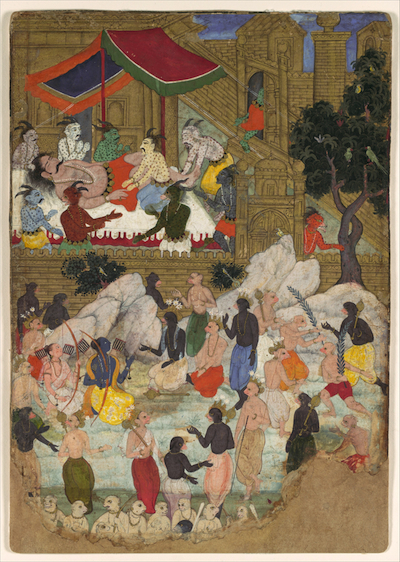