Laura Gibbs · 150. Rama Worships Durga
To prepare for war, Rama honored Durga, the warrior-goddess. "I will offer her 108 perfect blue lotuses," Rama said, "one for each of her sacred names."
So Rama gathered the lotuses and began chanting the names, offering one lotus for each name.
But when Rama reached the last name, he realized he had miscounted: he was short one lotus. Without hesitating, Rama took an arrow, ready to extract one of his eyes to offer instead.
At just that moment, the goddess appeared. "Stop!" she said. "Your offering is complete, Lotus-Eyed Rama."
Then the goddess blessed Rama, bestowing victory upon him.
Inspired by: Sita: An Illustrated Retelling of the Ramayana by Devdutt Pattanaik. Notes: This story is on p. 241 of the book, and it is related to the ritual called Akal Bodhon. This episode is found in the Bengali Ramayana. In Bengal for the Dussehra holiday, 108 lamps are lit to commemorate the 108 lotuses. 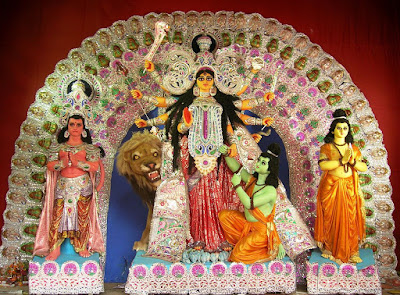