Laura Gibbs · 68. Lakshmana Chases a Boar
Lakshmana had tracked a wild boar through the dense woods. He then raised his sword to strike the boar, but missed. Instead, he cut off the head of an ascetic. The ascetic had been meditating, motionless and silent; Lakshmana hadn't even noticed he was there.
Lakshmana wept for what he had done, but then the god Indra appeared.
"That hermit was Ravana's nephew," said Indra. "He was meditating in order to acquire powers he could use to destroy me. I sent the boar to lure you here. You have accomplished a great deed, and I thank you!"
Then, Indra vanished.
Inspired by: Sita: An Illustrated Retelling of the Ramayana by Devdutt Pattanaik
Notes: This story is on p. 122 of the book. Pattanaik explains that this story comes from Odia, Telugu, Tamil and Malayalam folklore. Pattanaik gives his name as Sunkumar, son of Shurpanakha. 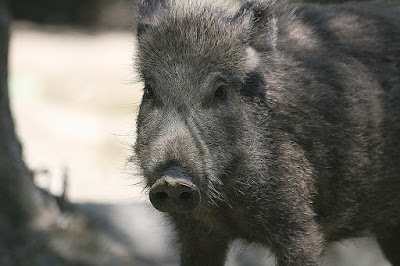