Laura Gibbs · 74. Khara and Dushana Attack
With each slice of Lakshmana's sword as he cut off Shurpanakha's ears and nose, one of Ravana's heads fell off. Though he was far away in Lanka, Ravana realized that someone had attacked his sister. "Who would dare do this!" he shouted.
Meanwhile, Shurpanakha ran into the forest. "Khara! Dushana!" she screamed. "Help me, cousins!"
Khara and Dushana led the forest rakshasas against Rama and Lakshmana, but the princes of Ayodhya defeated them all. Khara and Dushana fell in battle, and rakshasa corpses covered the forest floor.
Looking around, Rama said to Lakshmana, "We must be even more vigilant now."
Inspired by: Sita: An Illustrated Retelling of the Ramayana by Devdutt Pattanaik
Notes: This story is on p. 127 of the book. In Valmiki's Ramayana, this is the Aranya Kanda (Book 3), sarga 19. In Valmiki, Rama and Lakshmana fight off the demons in multiple waves until the final battle with Khara in sarga 30. Pattanaik notes that the legend of Ravana's heads falling off comes from the Tamil tradition. Pattanaik notes that Tataka defended her forest domain with two helpers (Maricha and Subahu) and here Shurpanakha defends her domain with two helpers (Khara and Dushana), much like temples of the Goddess show the Goddess flanked by two warriors. "Did Vedic sages encounter such forest goddesses when they entered the jungles of south?" Pattanaik asks. 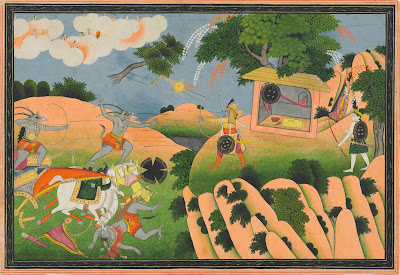