Laura Gibbs · 42. Sita Surprises Her Sisters
King Janaka had a bow that long ago belonged to the god Shiva. Shiva's bow was so heavy that it took a dozen men to move it.
One day, Sita was helping her sisters to clean the palace. "We need to sweep here under the bow," said Sita.
"That's impossible," said her sisters. "No one can lift that bow!"
But Sita, with no effort at all, lifted the bow, while her sisters stared at her in amazement.
Later, Janaka used the bow as a marriage test. "Whoever can lift this bow and string it shall marry my daughter!" he proclaimed.
Inspired by: Sita: An Illustrated Retelling of the Ramayana by Devdutt Pattanaik
Notes: This story is on p. 46 of the book. In some versions, Sita lifts the bow to retrieve a ball that rolled under the bow. 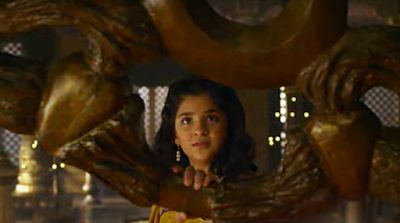