~ 23. Rishyashringa Sees a Woman for the First Time ~

Laura Gibbs · 23. The King of Anga and Rishyasringa
Because Vibhandaka defied Indra, Indra deserted Anga.
No rain fell. Crops failed. The people starved.
The king of Anga sent his daughter to Vibhandaka's ashram. "Seduce Vibhandaka's son, and bring him here. He will appease the rain-god."
The princess waited for Vibhandaka to go gather food, and then she began singing and dancing.
Rishyashringa was enchanted. "Who are you?" he asked. "What are you?"
"I'm a woman," she said.
Rishyashringa had never seen a woman before. He went with her to the palace, and rains returned to the land.
Later, Rishyashringa went to Ayodhya to help Dasharatha get a son.
Inspired by: Sita: An Illustrated Retelling of the Ramayana by Devdutt Pattanaik
Notes: This story is on p. 14 of the book. Vibhandaka drew a line, rekha, around his hermitage that no woman could cross, much as Lakshmana drew the Lakshmana-Rekha around Sita's hut to protect her from male intruders. In some versions, the woman who seduces Rishyasringa is Shanta, Dasharatha's own daughter. 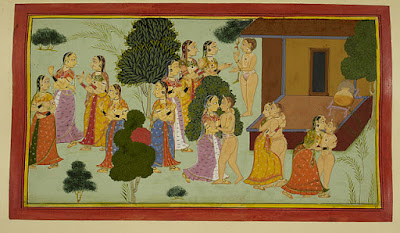