Laura Gibbs · 176. Ratnakar Becomes Valmiki
After Ratnakar renounced his life of crime, he went deep into the forest to live a hermit's life.
As he sat there, unmoving, deep in meditation, ants built an anthill around him. The anthill, "valmiki" in Sanskrit, became his home. Plants wrapped their tendrils around him, and birds nested in his matted hair and beard.
Meanwhile, he thought only of Brahman, the Cosmic Reality. "All is Brahman, all is God. All this Universe is Brahman, all that live and move and die."
Years later, he awoke, enlightened, and emerged from the anthill.
Ratnakar the robber was now the rishi Valmiki.
Inspired by: "Ratnakar, the Robber-Chief" by Shoshona Devi, in her book Indian Fables and Folklore.
Notes: The word "valmi" means ant in Sanskrit. The words on which Valmiki meditates come from the Chandogya Upanishad. There is also a variant where he chants "Ma Ra" which morphs into the chant "Rama" over time. 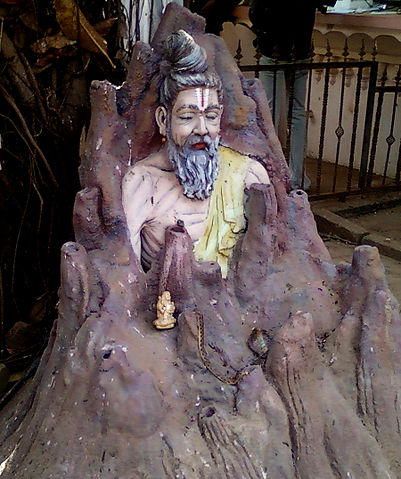 (Valmiki in the anthill)