Laura Gibbs · 46. Parashurama Appears
When he heard the sound of Shiva's bow breaking, Parashurama suddenly appeared, the greatest warrior among the brahmins. "Sita's suitor was to string the bow," he shouted, "not break it! Who did this?"
"I did," Rama replied calmly, "Prince Rama of Ayodhya."
"You must shoot me, Prince Rama!"
"I hesitate, Parashurama; you are brahmin-born."
"Your arrow won't kill me," said Parashurama, "but will only transport me to Mount Mahendra, and there I can dwell in peace."
Rama shot an arrow, and Parashurama vanished.
King Janaka sighed with relief. "Well done, Rama!" he said, and Sita smiled, proud of her husband-to-be.
Inspired by: Sita: An Illustrated Retelling of the Ramayana by Devdutt Pattanaik
Notes: This story is on p. 57 of the book. It is also told beginning in Valmiki's Ramayana, Bala Kanda, sarga 74 and following, where the confrontation takes place after the wedding. The bow that Rama broke was known as Pinaka; the bow he receives from Parashurama is the Sharanga (also called Kodanda). You can find out more at Wikipedia. 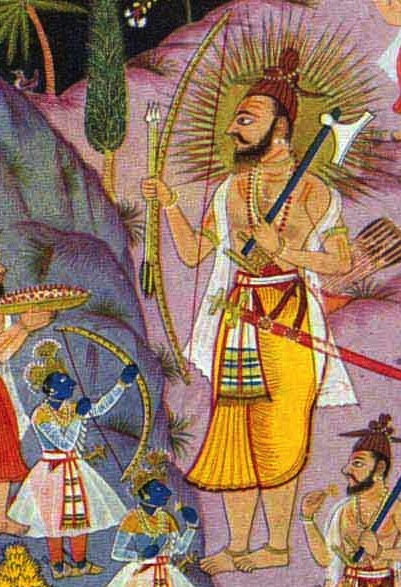