Laura Gibbs · 37. They Go to See Janaka's Bow
"Janaka, king of Videha, has a mighty bow that once belonged to Shiva," Vishvamitra said. "Whoever lifts and strings that bow will marry Janaka's daughter, Sita. Many kings and princes have tried to lift the bow; they all failed."
Rama and Lakshmana looked at Vishvamitra expectantly.
"Let's go see that bow," he said.
Vishvamitra then took the princes to Mithila, Janaka's royal city.
Janaka was delighted by their arrival. "Powerful men have been defeated by this bow, and in their anger they have waged war against me," he said. "I'll gladly wed Sita to Rama if he passes the test."
Inspired by: Valmiki's Ramayana
Notes: This is the Bala Kanda (Book 1), sarga 31. 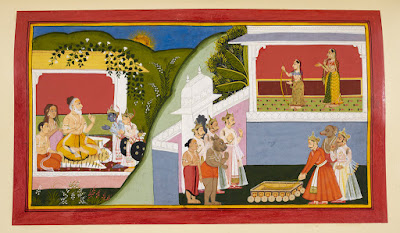