Laura Gibbs · 115. The Nightingale's Advice
A bird-catcher captured a nightingale.
"If I teach you three secrets," she begged, "will you set me free?"
The man agreed.
"First: when you lose something, let it go. Second: don't grieve. Third: don't believe in the impossible."
"Thank you!" said the man, and he set the nightingale free.
"By the way," she added, "there's a ruby in my stomach as big as an apple."
The man started weeping.
"Apply the secrets!" the nightingale said. "Let it go, don't grieve, use your brain: how could I have a ruby that big in my stomach?"
Laughing, the nightingale then flew away.
Inspired by: Mille Fabulae et Una, a collection of Latin fables that I've edited, free to read online. I am not translating the Latin here; instead, I am just telling a 100-word version of the fable.
Notes: This is fable 543 in the book, which is Perry 627. In the original version, the nightingale spells it out for the man: since he let her go, he shouldn't try to get her back; he shouldn't grieve over having lost her; and it's clearly impossible that a nightingale could contain anything as big as an ostrich egg in her stomach, much less a ruby. 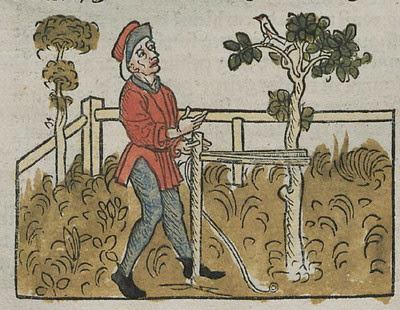