Laura Gibbs · 86. The Miller's Cat and the Mice
There was a mill infested with mice, so the miller got a cat to kill the mice. The cat was ferocious and soon there were only a few mice still left alive.
The surviving mice, seeing slaughter all around them, retreated to the highest hiding places they could find, never coming down where the cat was lurking.
The cat decided to play dead, lying motionless on the floor.
"Look! The cat's dead!" squeaked the mice.
But the oldest and wisest of the mice warned them, "Don't let that cat fool you! You can't ever trust a cat, living or dead."
Inspired by: Mille Fabulae et Una, a collection of Latin fables that I've edited, free to read online. I am not translating the Latin here; instead, I am just telling a 100-word version of the fable.
Notes: This is fable 203 in the book, which is Perry 79. In other versions of the story, the cat is hanging up instead of lying on the floor. 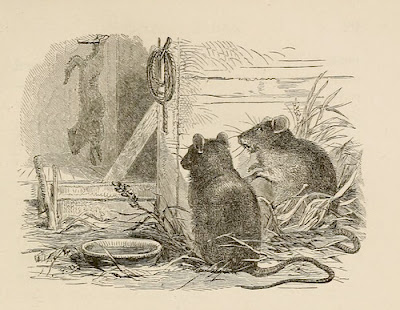