Laura Gibbs · 190. Anansi Meets Death
Anansi saw someone barbecuing meat. It was Death!
"Can I eat?" Anansi asked.
Death said nothing.
Anansi took some meat. "My daughter can cook for you," Anansi said, and Anansi brought his daughter to Death.
Later, Anansi saw his daughter wearing Death's ring. Anansi was angry! He grabbed Death's long hair and tied him to a tree. He lit a fire, but the fire just burned Death's hair.
Death got loose and chased Anansi.
Anansi's family hid from Death, but Death grabbed them one by one.
Only Anansi escaped; he hid in the dirt. Anansi still lives in the dirt. 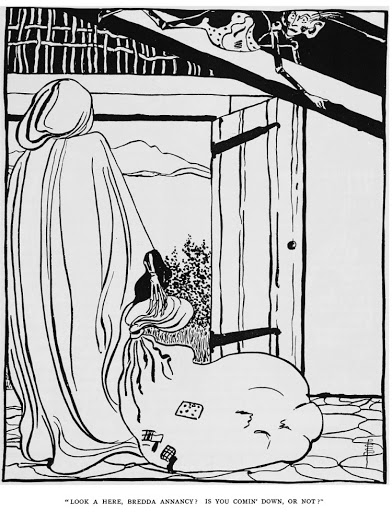