The Politics of Wolves and Sheep

When King Philip of Macedon wanted to make a treaty with the people of Athens, he insisted they hand over their orators as hostages.
Demosthenes then told the people a fable to expose the dangers of King Philip's plan. "The wolves once made a treaty with the shepherds," Demosthenes said, "that they would never attack the flock, provided the shepherds handed over the sheepdogs as hostages. The foolish shepherds agreed. Then, when the wolves saw the sheep were defenseless, they attacked and killed all the sheep — just like King Philip will attack and kill the people of Athens."


Inspired by: Mille Fabulae et Una, a collection of Latin fables that I've edited, free to read online. I am not translating the Latin here; instead, I am just telling a 100-word version of the fable.
Notes: This is fable 82 in the book. This anecdote about Demosthenes can be found in Plutarch’s Life of Demosthenes; in denouncing Alexander, Demosthenes referred to him as the Macedonian monolukos, the leader of the Macedonian wolf pack. 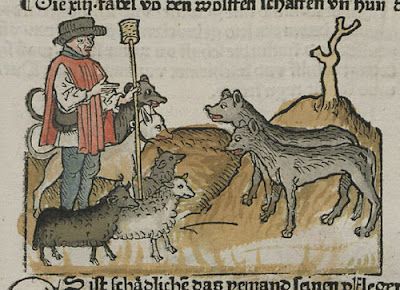 A drabble is a story told in 100 words, or fewer. I'll be collecting drabbles here inspired by folktales from around the world. Find out more about this project here: A GUIDE TO THE MICROFABLES.