Laura Gibbs · 180. The Two Men and the Donkey
Two friends were traveling through the woods when they found a stray donkey. They each laid hands upon the creature.
"It's mine!" shouted the first man.
"No, it's mine!" shouted the other.
They shouted for a while, and then they began to pummel one another with their fists.
The donkey stood there, watching them, and finally he galloped away deep into the woods.
When the men paused in their fighting, they noticed that the object of their quarrel was gone, but they kept on arguing nonetheless.
"It was mine!" shouted the first man.
"No," shouted the other, "it was mine!"
Inspired by: Fables of Aesop and Other Eminent Mythologists by Roger L'Estrange, 376.
Notes: This fable is not part of the classical Aesop tradition; find out more here.

Here is an illustration by Harrison Weir: 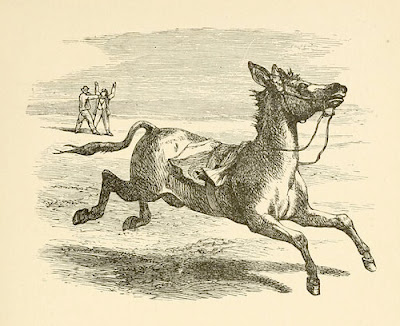