Laura Gibbs · 144. The Farmer and his Weather Wishes
Zeus had a farm that needed a tenant.
There was a farmer who agreed to work the land, provided that Zeus would arrange the weather, hot or cold, wet or dry, based on the man's own wishes.
The farmer thus had his own weather, different from the weather at neighboring farms. But because he didn't understand how weather works, the neighboring farms prospered, while his own crops all failed.
Finally he implored Zeus to take charge of the weather again.
"Divine Providence knows better what the earth needs," the farmer admitted. "I will follow heaven's way, not my own whims."
Inspired by: Fables of Aesop and Other Eminent Mythologists by Roger L'Estrange, 435.
Notes: This fable is not part of the classical Aesop tradition; find out more here. In the Latin language, the word "Jupiter" (the name of the god called Zeus by the Greeks) also meant "weather" through his association with the sky and with storms, so if you want to ask someone how the weather was, you could say, "How's the Jupiter?"

Here is an illustration from a 16th-century Aesop: 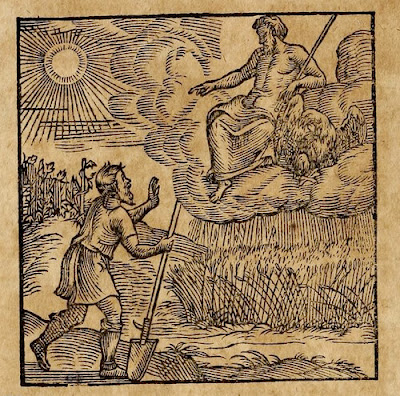