Laura Gibbs · 145. Prometheus and the Satyr
The Titan Prometheus stole fire from the heavens and brought it down to earth.
A satyr was fascinated by the fire and tried to embrace it, wrapping his arms around the flames. "Ouch!" he shouted. "That hurts!"
"You have to be careful," cautioned Prometheus. "The fire will burn your beard if you get too close."
"I don't understand," said the satyr. "Why would you bring us something so dangerous?"
"Fire gives heat, and fire gives light," said Prometheus. "It's up to you to learn how to use it wisely. The danger lies not in its use, but in its misuse."
Inspired by: Fables of Aesop and Other Eminent Mythologists by Roger L'Estrange, 471.
Notes: This is Perry 467.

Here is an illustration by Jacob Cats: 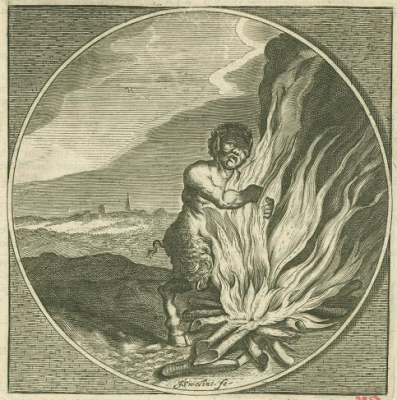