Laura Gibbs · 16. Ravana and Vedavati
As Ravana wandered the woods, he saw a beautiful woman practicing austerities at a fire-altar, clothed in a deer-skin, her hair twisted in jatas.
"Lovely lady," he said, "you should be wearing silks and jewels, not this ascetic garb. Be my wife!"
"I am Vedavati," she replied, "and I am dedicated to the god Vishnu; I will marry no other."
Ravana grabbed her hair, but Vedavati magically cut herself free.
"With my dying words I curse you, Ravana!" she said, throwing herself into the flames. "I will be born again for your destruction."
Vedavati would later be reborn as Sita.

Inspired by: The Ramayana (Uttara Kanda: Sarga 17).
Notes: Vedavati tells Ravana the story of how all manner of creatures asked her father to marry her, but he refused them all, vowing that she would marry Vishnu. A daitya named Shambhu was so angry at this refusal that he killed her father, and her mother threw herself onto her father's funeral pyre, leaving Vedavati an orphan. Pattanaik, in his Sita (p. 120) notes that the Skanda Purana says Vedavati became Padmavati and thus married Vishnu as Venkateshwara Balaji. In Jammy, Vedavat is associated with Vaishno Devi, who beheaded Bhairava. Vedavati is also associated with the Maya Sita legend; Vedavati is Sita's double. 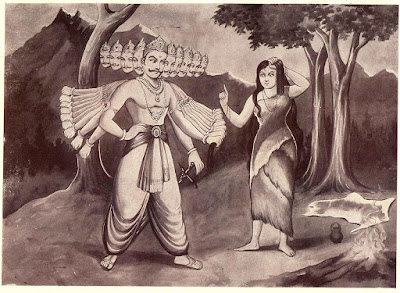