Laura Gibbs · 166. Nasruddin Plays the Lute
"I can play any instrument!" Nasruddin declared confidently.
His friend gave him a lute. "Play this!" he said.
Nasruddin grabbed the lute and awkwardly strummed a single chord. He then strummed the same chord over and over, smiling contentedly the whole time.
"That sounds horrible," Nasruddin’s friend protested. "Real lute players move their hands up and down when they are playing music on the lute."
"That’s because they don’t know what they're doing, unlike me," retorted Nasruddin. "They are unsure where to find the notes they are looking for, but I know exactly the chord that I want to play."
Inspired by: The Uncommon Sense of the Immortal Mullah Nasruddin by Ron Suresha
Notes: This is story 238 in the book. This story is told about different stringed instruments, most often about an oud; you can find out more about the oud at Wikipedia. 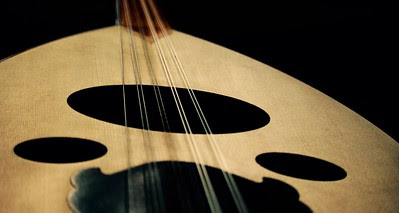