Laura Gibbs · 103. Nasruddin and the Neighbor's Bull
Nasruddin's neighbor had a bull, and one day that bull blundered into Nasruddin's garden, trampling all of Nasruddin's vegetables.
When Nasruddin saw what his neighbor's bull had done, he grabbed a whip and chased the bull out of the garden, whipping the bull as he did so.
"You accursed creature!" he shouted. "I'll show you who's the boss here! Take that! And take that!"
The bull bellowed loudly every time he felt the sting of Nasruddin's whip.
"Hey there!" shouted Nasruddin's neighbor. "What are you doing?"
"You stay out of this," replied Nasruddin. "This is between me and the bull!"


Inspired by: The Exploits of the Incomparable Mulla Nasrudin by Idries Shah, free to read online at the Idries Shah Foundation.
Notes: This is story 57 in the book. In another version, an ox wrecks Nasruddin's garden, and then the ox runs off. He sees it a few days later and starts beating it. "It knows it's guilty!" 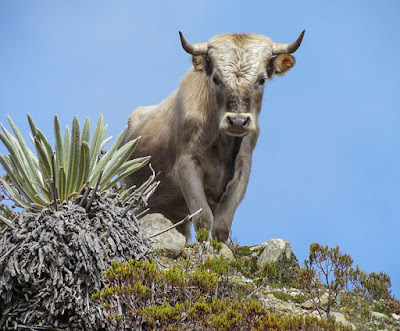