The Farmer and the Deer

A farmer cleared land by the deer trail, and a deer kept eating her crops.
She told a man to trap the deer, so he made a trap.
The deer came and got caught. When the woman saw the deer, she called to the man, "Come kill the deer!"
Then she placed a mat on the ground, took off her clothes, and lay down by the deer. The man came, saw her, and they made love.
Meanwhile, the deer escaped.
"It's your fault the deer escaped!" the woman shouted.
"No," the man shouted, "it's your fault!"
Whose fault was it?
Inspired by: "The Deer in Woman's Farm" in Tribes of the Liberian hinterland by George Schwab, 1947.
Notes: You can read the original story online. Schwab heard this dilemma tale from a Mano schoolboy in Liberia. 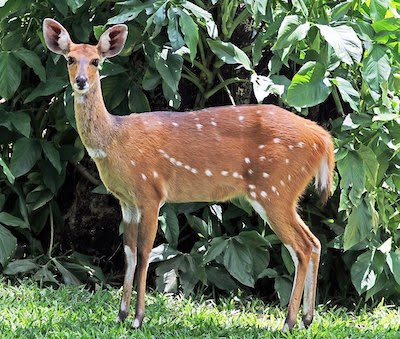 Email ThisBlogThis!Share to TwitterShare to FacebookShare to Pinterest
Labels: African, African: Deer, African: not in book, book: no, need sheet