The Creator and the Frogmouth Bird

The Frogmouth bird has a huge mouth now, but in the beginning the Creator gave the bird a normal mouth.
"I don't like this!" the bird protested. "I want a bigger mouth."
The Creator picked up a knife and said, "Come here; I'll fix it for you."
The bird approached the Creator and opened his mouth. Then, as the Creator used his knife to widen the bird's mouth, the knife slipped, and the bird's mouth stretched from ear to ear.
That's how the Frogmouth bird got his big mouth, but he doesn't mind: he uses it now for catching insects.
Inspired by: "The Story of Mr. Night-jar and the Creator" in Lamba Folklore by Clement M. Doke, 1927.
Notes: You can read the original story online. The story is told about a nightjar bird, but I have used the specific name "frogmouth" here, which is a species of nightjar, to convey the idea of its huge mouth; apparently this huge gaping mouth evolved as a way for the birds to catch insects: Wikipedia. I even found an article about frogmouth birds at the New York Times! 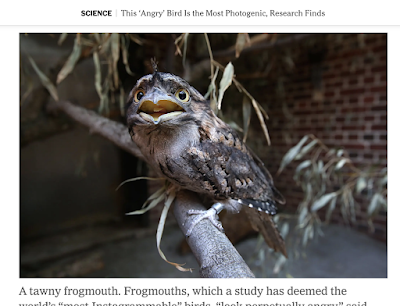