Nasruddin and his Donkeys

Nasruddin was taking his donkeys into the forest to fetch firewood. As he rode towards the forest, he counted the donkeys: One-two-three-four-five-six-seven-eight-nine.
"Oh no!" shouted Nasruddin. "A donkey is missing. Perhaps a wolf ate him, or a thief stole him!" Grieving for his donkey, he reached the forest, gathered firewood, and loaded the donkeys.
Then he counted again: One-two-three-four-five-six-seven-eight-nine-ten.
"Ah," said Nasruddin. "He came back, thank goodness!"
As he rode home, Nasruddin counted the donkeys again: One-two-three-four-five-six-seven-eight-nine.
"That cursed donkey!" exclaimed Nasruddin. "I imagine he's run home ahead of us."
Nasruddin never thought to count the donkey he was riding.
Inspired by: "Sheikh Nasreddin Counts the Donkeys" in Ethiopian Folktales collected by Elizabeth Laird (website).
Notes: You can read the original story online. This is a classic Nasruddin story, famous throughout the Muslim world. The storyteller is Hajji Abdu Settar Mohammed Bashir. 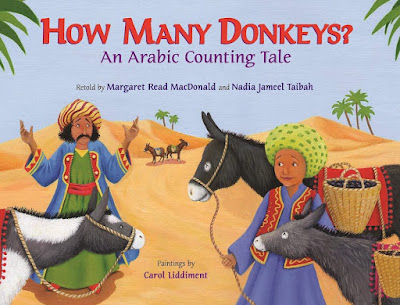