The Lion and the Wild Dogs

Nine wild dogs were hunting gazelles when a lion insisted on joining them.
Together they caught and killed ten gazelles.
"We must divide equally!" roared the lion.
"We are ten," said a dog, "and the gazelles are ten. Let us each take one gazelle!"
The lion snarled and slashed him with his claws.
"You, King-of-the-World, are one," said another dog, "and we are nine. You need nine gazelles to make ten, while we need one gazelle to make ten. That's an equal division."
The lion smiled. "Where did you learn such wisdom?"
"From your claws, O King," replied the dog.
Inspired by: "Nine Wild Dogs Go On A Hunt" African Stories by Albert D. Helser, 1930. (There are stories from the Bura people of Nigeria.)
Notes: You can read the original story online. In the original the lion knocks out the eye of one of the dogs; it was easier to tell the story with the lion slashing him. 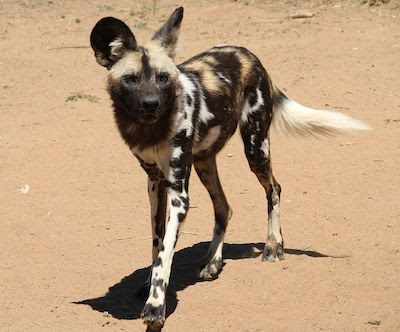