When Rabbit and Antelope Were Starving

Rabbit and Antelope were both starving.
"We need to keep the food we have inside us longer," said Rabbit. "Let's sew each other down below, but just partly, not completely."
Antelope agreed, and they sewed each other down below... but Rabbit sewed Antelope completely shut.
Then Antelope swelled up and died.
A man found her body and took it home for butchering. He started by cutting the stitches Rabbit had sewn. All that had been stuck inside came out, and Antelope leaped up and bounded away.
She wasn't dead after all, and she hated Rabbit for how he tricked her.
Inspired by: "Hare: Grey Antelope, Again" in The Life of a South African Tribe: volume 2 by Henri Junod, 1912.
Notes: You can read the original story online. For another encounter, see: Rabbit, Antelope, and the Beans. 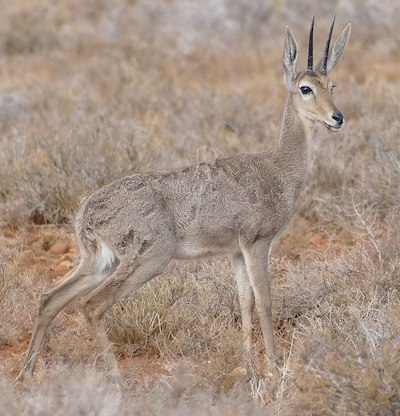