The next time Wolf farmed with Rabbit, he was ready.
"Let's plant corn!" said Rabbit.
"And this time," said Wolf, snarling, "I'll take the tops and the bottoms."
"Alright," said Rabbit, looking very humble. "I agree: tops and bottoms both for you."
Wolf worked extra hard, and the corn grew tall and strong.
"All mine!" he thought.
But Wolf was wrong. At harvest-time he went to the field, and all he found were stalks from the bottom of the corn and silk from the top.
Rabbit left the tops and the bottoms, but he had taken the ears for himself.
Inspired by: The Days when the Animals Talked by William J. Faulkner.
Notes: This is "09. Brer Fox Tries Farming Too" where Fox joins in on the farming adventure. To keep things simple, though, I did not add Fox into the mix; instead, I just had Rabbit trick Wolf for the third and final time with the corn. 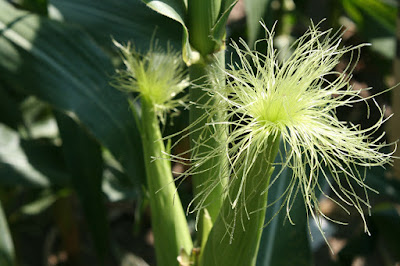