Laura Gibbs · 90. The Story of Rama
"Has any king suffered more than I?" Yudhishthira asked the rishis.
"Listen to Rama's story," the rishi Maitreya told him. "Rama was blameless, but his father, King Dasharatha, exiled him at the behest of a jealous queen. For fourteen years, Rama lived as a forest hermit with his brother, Lakshmana, and his wife, Sita. Then the king of the rakshasas, Ravana, kidnapped Sita, and Rama had to wage a war to rescue her. He had no human allies, but with an army of monkeys, including the monkey-god Hanuman, he defeated Ravana. Only after all those hardships did Rama become king."
Inspired by: Jaya: An Illustrated Retelling of the Mahabharata by Devdutt Pattanaik.
Notes: This story is on p. 164. You can read the complete story of Rama's adventures here at Ramayana.LauraGibbs.net. There are various rishis who do the storytelling in the Mahabharata, but I focused on Maitreyi because of the story of how he cursed Duryodhana later. 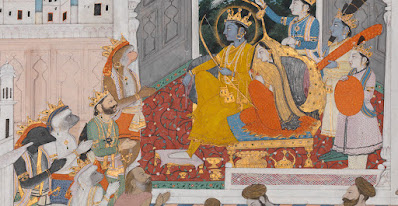