Rabbit laughed and laughed when Tiger fell in the mud. Then, when Tiger chased him... Rabbit ran!
Rabbit ran fast, but Tiger ran fast too.
Trying to hide, Rabbit jumped behind a tree, but Tiger reached around and grabbed him. "Gotcha!" he growled.
"That's nothing but a tree root," Rabbit lied. "Pull on that root all you want! Go ahead and pull, fool!"
"Feels like rabbit-fur to me!" Tiger growled.
"That's just moss!" Rabbit lied again. "Don't you know anything?"
Feeling shamed by Rabbit's words, Tiger let go, and Rabbit slipped away into the bushes, laughing even louder than before.

Inspired by: Young Brer Rabbit and Other Trickster Tales from the Americas by Jaqueline Shachter Weiss; she notes that this is a story from Venezuela.
Notes: This story is on p. 11: "The Root." Weasel is also a character in the story; he warns Rabbit to be careful of Tiger, and he also tells Tiger which way Rabbit went, hoping for a reward, but the angry Tiger punishes him in the end. I added the part about the moss. 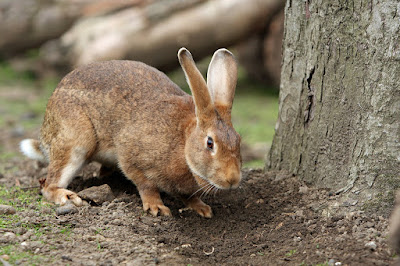