Laura Gibbs · 46. Kunti's Elephant Ritual
Kunti decided to perform an elephant ceremony to bring blessings upon her sons, so she had the potters of Hastinapura make elephants of clay for her to use.
Gandhari was jealous and wanted to perform an even grander ritual for her sons, so she had the goldsmiths make golden elephants.
Kunti was dismayed, but Arjuna said, "Don't worry! I'll ask my divine father Indra to send his heavenly elephant Airavata." Arjuna then lifted his bow, shooting arrows into the sky to create a bridge by which Airavata descended.
Kunti thus conducted the most grand elephant ritual ever seen in Hastinapura.
Inspired by: Jaya: An Illustrated Retelling of the Mahabharataby Devdutt Pattanaik.
Notes: This story is on p. 77. Pattanaik notes that the story is associated with an elephant ritual, Yanai Pandigai, that is celebrated in Karnataka. 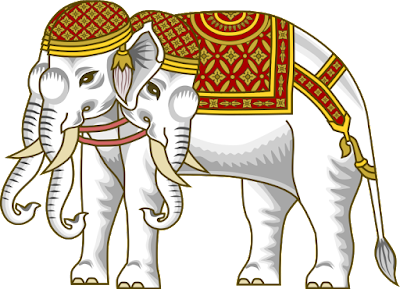