Laura Gibbs · 69. Draupadi Becomes a Mother
The five Pandava brothers had agreed to share Draupadi as their wife, and each brother was her husband for one year at a time. As the year ended and Draupadi's time with one husband ended and another husband began, she would walk through fire and thus regain her virginity, year after year.
Over time, Draupadi had five sons, one with each of the Pandavas; they were known as the Upapandavas.
Her son with Yudhishthira was Prativindhya.
Her son with Bhima was Sutasoma.
Her son with Arjuna was Shrutakarma.
Her son with Nakula was Shatanika.
Her son with Sahadeva was Shrutasena.

Inspired by: Jaya: An Illustrated Retelling of the Mahabharataby Devdutt Pattanaik.
Notes: This story is on p. 115. 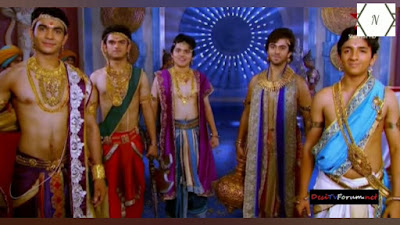