Laura Gibbs · 8. The Story of Satyavati
Who was Satyavati? This is her story:
King Uparichara, resting beneath a tree, thought of his wife and ejaculated. He wrapped the semen in a leaf and gave it to a parrot to take to his wife.
But a falcon attacked the parrot, and the leaf fell into a river.
A fish ate the leaf... a fish who was actually an apsara cursed to live as a fish.
A fisherman caught the fish and found twin babies inside. He took them to King Uparichara, who accepted the boy but gave the girl to the fisherman.
She became his daughter: Satyavati.
Inspired by: Jaya: An Illustrated Retelling of the Mahabharataby Devdutt Pattanaik.
Notes: This story is on p. 34. Pattanaik gives the apsara's name as Girika. 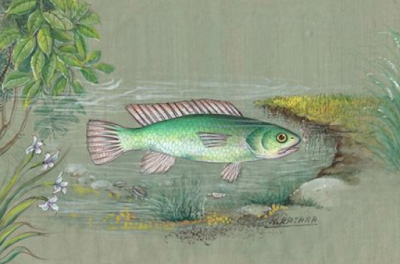