Laura Gibbs · 178. The Pandavas Return to Hastinapura
Having won the war, the Pandavas returned to Hastinapura to claim the kingdom.
Dhritarashtra greeted them. "Where is Bhima?" the blind king asked. "I wish to embrace him."
But Krishna had foreseen this moment and warned the Pandavas to give Dhritarashtra an iron statue of Bhima to embrace instead.
With the power of his grief, Dhritarashtra crushed the statue. Then, realizing what he had done, he burst into tears. "Oh Bhima, my nephew, what have I done?"
"That was only a statue of Bhima," Krishna said reassuringly. "You have had your revenge."
Dhritarashtra wept with gratitude and embraced Bhima warmly.
Inspired by: The Mahabharata: A Shortened Modern Prose Version by R. K. Narayan
Notes: This story is from Chapter 16: Victory and Sorrow. 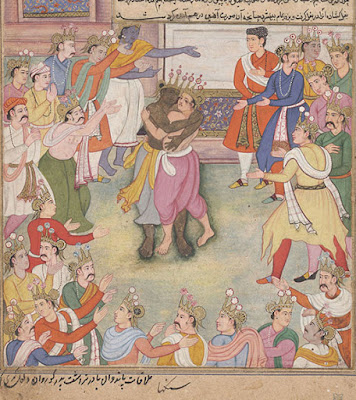