Laura Gibbs · 103. The Pandavas Look for Water
Tracking a deer deep into the forest, the Pandavas grew tired and thirsty. "We'll rest here," Yudhishthira said, "and you look for water, Nakula."
Nakula found a lake, and began to drink when a voice shouted, "Stop!"
Nakula saw no one, just a crane.
"Stop!" It was the crane who spoke. "You must answer my questions before you drink."
But Nakula was so thirsty that he could not resist. He drank. He died.
When Nakula did not return, Yudhishthira sent Sahadeva. Then Arjuna. Then Bhima.
Then Yudhishtira himself came to the lake, and he saw his brothers lying there, dead.
Inspired by: The Mahabharata: A Shortened Modern Prose Version by R. K. Narayan
Notes: This story is from Chapter 9: Hundred Questions. 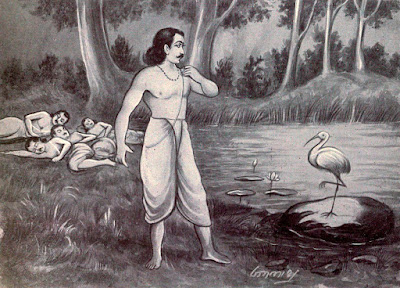