Laura Gibbs · 113. Arjuna Faces the Kauravas in Battle
The thirteenth year of exile had ended at midnight, and Duryodhana had not found the Pandavas in time, which only made him more determined to defeat them in battle. He sent Karna against Arjuna; they fought fiercely, and Karna finally left the field drenched in his own blood.
Arjuna then used a mantra to put the Kauravas to sleep and commanded Prince Uttara to strip their clothes to take as trophies.
Back at the palace, Arjuna resumed his identity as Brihannala.
"Take the trophies to your father and tell him you won the battle," he said, and Uttara smiled gratefully.
Inspired by: The Mahabharata: A Shortened Modern Prose Version by R. K. Narayan
Notes: This story is from Chapter 10: Servitude. 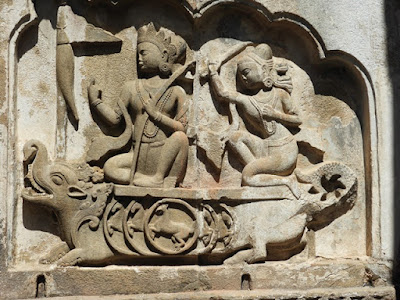