Laura Gibbs · 128. The Armies Assemble
"It is war then," said Yudhishthira, and he appointed generals to lead his seven armies, including his brother Bhima, along with Draupadi's father Drupada and Drupada's sons Dhristadyumna and Shikhandin.
Duryodhana had eleven armies to Yudhishthira's seven, and Bhishma was his supreme commander. Karna, however, had vowed that he wouldn't fight while Bhishma was in command, so he bided his time on the sidelines.
The armies marched to Kurukshetra, the battlefield where they would meet.
Dhritarashtra's charioteer Sanjaya, by a divine gift, could see what was happening on the battlefield, and thus he narrated to Dhritarashtra everything as it occurred.
Inspired by: The Mahabharata: A Shortened Modern Prose Version by R. K. Narayan
Notes: This story is from Chapter 14: Hesitant Hero. 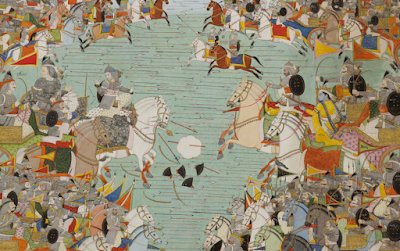