Laura Gibbs · 141. Shikhandin Confronts Bhishma
On the tenth day the Pandavas realized they could use Shikhandin against Bhishma: Shikhandin had been born a woman, and Bhishma would not fight a woman. So Shikhandin rode forward and, under Arjuna's protection, began shooting at Bhishma.
"I won't fight you, Shikhandin," Bhishma shouted.
"Fight or not," Shikhandin replied, "I will slay you today. I was born for this!"
Shikhandin continued firing, and Arjuna shot Bhishma too. The old warrior's body was pierced everywhere with arrows. When he fell, he didn't touch the ground. Instead, he rested on a bed of arrows.
Both sides stopped fighting when Bhishma fell.
Inspired by: The Mahabharata: A Shortened Modern Prose Version by R. K. Narayan
Notes: This story is from Chapter 15: Delirium of Destruction. Narayan says that this happened on the sixth day of the war, but it happened on the tenth; see the useful day-by-day summary at Wikipedia. 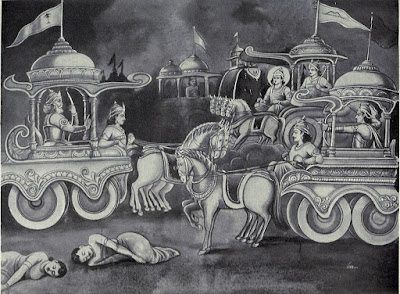