Laura Gibbs · 126. Krishna Addresses the Assembly
"Five villages for the Pandavas," Krishna announced to the assembly. "That's all they ask."
"No! They lost their kingdom!" Duryodhana shouted. "I will give them not so much as a needlepoint of land."
Duryodhana then summoned his allies to seize Krishna, but Krishna laughed and revealed himself in his divine form containing the sun and moon and stars, with all the world's armies around him.
Dhritarashtra even regained his sight at that moment; he too saw God.
Duryodhana could not seize Krishna because Krishna was... everything.
Krishna then put on mortal form again and left the assembly in stunned silence.
Inspired by: The Mahabharata: A Shortened Modern Prose Version by R. K. Narayan
Notes: This story is from Chapter 13: Action. 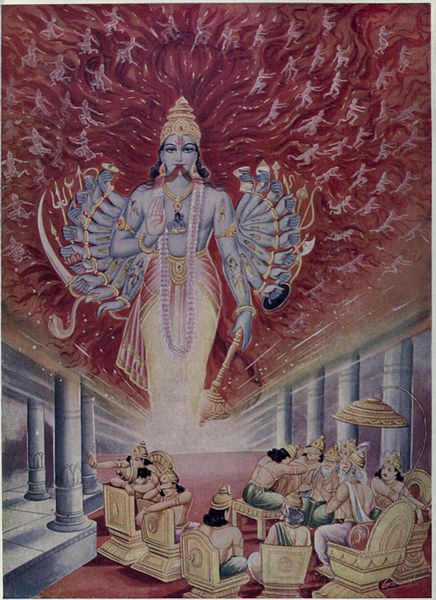