Laura Gibbs · 146. Duryodhana Plans to Capture Yudhishthira
Duryodhana wanted to capture Yudhishthira alive. "Make that your priority!" he told Drona, now commander-in-chief. Duryodhana hoped to compel Yudhishthira to accept an invitation to gamble again, sending the Pandavas into another exile as a way to end the war.
Drona, however, failed to capture Yudhishthira. "Under Arjuna's watchful protection, there is no way to capture him," Drona protested.
"The fault is yours!" Duryodhana shouted. "You favor the Pandavas, despite being my commander-in-chief."
A band of Duryodhana's soldiers then took the samshaptaka oath, vowing to kill Arjuna or die trying. "Victory or death!" they cried as they rode into battle.
Inspired by: The Mahabharata: A Shortened Modern Prose Version by R. K. Narayan
Notes: This story is from Chapter 15: Delirium of Destruction. 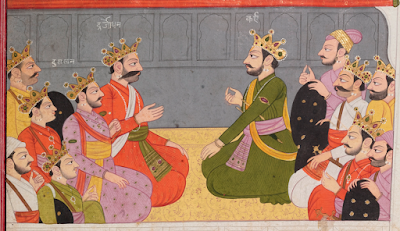