Laura Gibbs · 40. Unlucky Number Five
Saying the number five was bad luck. Anyone who said "five" dropped down dead!
Anansi decided to play a trick. He dug five yam-hills, and then he sat beside his yam-field, weeping.
Hog walked by. "What's wrong?" Hog asked.
"I can't count my yam-hills," said Anansi.
"You fool!" said Hog. "I'll count: one-two-three-four-five."
When Hog said "five" he dropped down dead.
Anansi ate him. Goat too. Dog. Cow.
Then Monkey came. "One-two-three-four," Monkey said, "plus one more!"
"You fool!" shouted Anansi. "Can't you count? It goes like this: one-two-three-four-five!"
When Anansi said five, he fell down dead.
Monkey ate him.

Inspired by: Jamaica Anansi Stories by Martha Warren Beckwith
Notes: This is story 31 in the book. Beckwith heard this story from George Parkes; additional information in Beckwith's notes. The number varies from story to story; I went with five. In some versions of this story, the number is the name of a witch, which is why it is deadly to pronounce. Here are Pamela Colman Smith's illustrations: 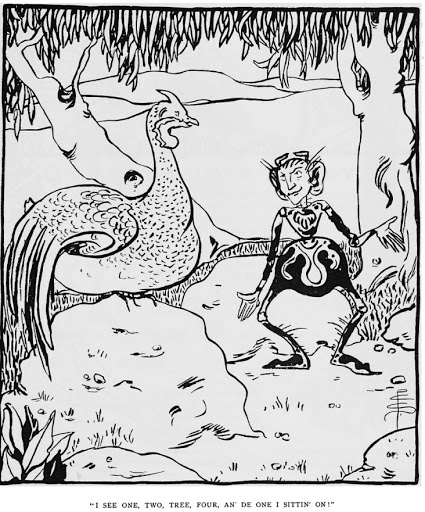