Laura Gibbs · 140. Nasruddin at the Baths
Nasruddin went to the bathhouse.
When the attendant saw Nasruddin's shabby clothes, he treated him poorly, giving him a threadbare towel and only a tiny piece of soap. Nevertheless, after Nasruddin finished his bath, he tipped the attendant very generously.
On his next visit, the attendant greeted Nasruddin with great respect, remembering the generous tip. He gave Nasruddin several luxurious towels and a new bar of soap. But when he left, Nasruddin gave the attendant no tip at all.
"That's for last time," Nasruddin explained, "and the tip I gave you last time was for this time. Now we're even!"


Inspired by: 202 Jokes of Nasreddin Hodja by Her Hakki Mahfuzdur, story 58. The story also appears in The Sufis by Idries Shah, free to read online at the Idries Shah Foundation.
Notes:  You can learn more about Turkish baths at Wikipedia.

I included this book in Tiny Tales of Nasruddin, where it is story 121. 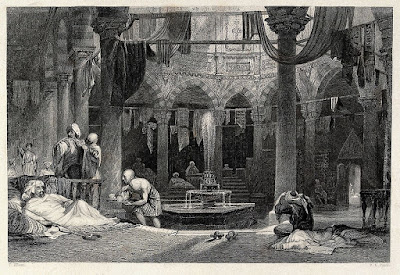